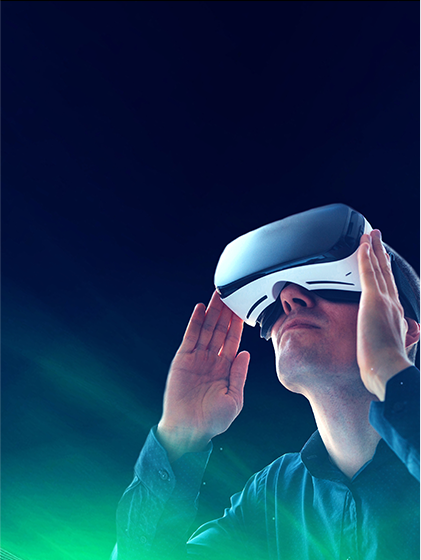 Our development team has extensive experience in developing user-friendly augmented and virtual reality apps for many different industries.

Industries that can benefit from VR and AR Apps include:

The main goal of augmented and virtual reality development is providing the best user experience, and Laminar’s development team always makes this a top priority.

Laminar Consulting develops beautiful, user-friendly applications for virtual, augmented, and mixed reality. Our cutting-edge development tools and our ability to gain a deep understanding of our client’s requirements enable us to deliver AR and VR solutions that exceed our clients’ expectations. We build AR/VR apps for everything from smartphones (both Android and iOS) to tablets to hybrid laptops.

Laminar leverages an extensive set of tools for developing AR and VR apps, including OpenCV, Vuforia, ARKit, Wikitude, EasyAR, ARToolKit, ARCore, and more. Our team has the experience to develop an AR or VR framework that’s perfectly aligned with your particular objectives. Laminar will work to develop a solution that nails your business needs on the head every time.

Laminar develops virtual reality solutions for realistic and collaborative scenarios that can boost sales through a vastly enhanced buying experience. We build custom 3D models for just about any field, such as healthcare, aerospace, education, automotive, travel, e-commerce, and more.

Our app development experience with building mixed reality empowers us to build solutions that can provide a real-time view of end-user surroundings with a digital overlay of virtual objects for visualizing the post-purchase experience or learning new skills as an employee. Whether the challenge is consumer-facing or enterprise, Laminar can build a solution for your company.

GET IN TOUCH FOR A FREE CONSULTATION

We partner with the leaders of Technology & Digital platforms to create the best possible solutions designed by industry proven professionals.

What Are Virtual Reality Development Services?

Virtual reality app development can help companies in a variety of ways, such as creating simulations for products and processes, along with improving data visualization and product interactions. Rather than conducting expensive in-person training, companies can leverage virtual reality training.

What Are Augmented Reality Development Services?

Augmented Reality (AR) differs from virtual reality (VR) in that instead of creating an entirely simulated environment, it blends digital content with the real world by layering it over live video feeds, often on a phone. This tech can also utilize the GPS of a phone for a geo-specific experience for users.

How Does Virtual Reality Work?

Virtual reality requires a headset and something to run the VR software. This headset can be standalone or connected to a PC, gaming console, or smartphone.

How Is Mixed Reality Used Today?

Mixed reality is often used within the education industry to enhance students’ ability to learn and consume dense information. 3D projections and simulations enable students to interact virtually with objects to aid study in a more immersive way.

Which Programming Language Is Used For Virtual Reality?

GET IN TOUCH FOR A FREE CONSULTATION

This website uses cookies to improve your experience while you navigate through the website. Out of these, the cookies that are categorized as necessary are stored on your browser as they are essential for the working of basic functionalities of the website. We also use third-party cookies that help us analyze and understand how you use this website. These cookies will be stored in your browser only with your consent. You also have the option to opt-out of these cookies. But opting out of some of these cookies may affect your browsing experience.
Necessary Always Enabled
Necessary cookies are absolutely essential for the website to function properly. This category only includes cookies that ensures basic functionalities and security features of the website. These cookies do not store any personal information.
Non-necessary
Any cookies that may not be particularly necessary for the website to function and is used specifically to collect user personal data via analytics, ads, other embedded contents are termed as non-necessary cookies. It is mandatory to procure user consent prior to running these cookies on your website.
SAVE & ACCEPT